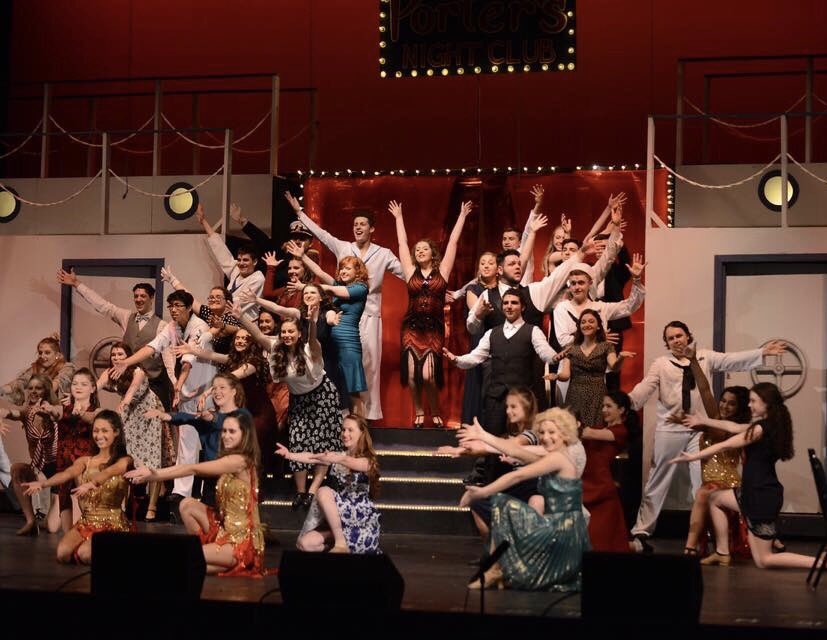 The Friday cast of Anything Goes

If you go to see a play at Cherokee, you will be taken into the heart of the fascinating world of drama. The Cherokee Drama Guild does a stellar job of bringing its audience out of their seats. Cherokee’s energetic shows are full of life, catchy music, spectacular dancing, and phenomenal acting. Each year, the Guild features a drama in the fall and a musical in the spring, and the hard work and determination demonstrated in both never fails to impress.

Cherokee’s most recent play, Anything Goes, was full of comedy, laughter, and truly majestic choreography. The play was a culmination of art. The energy was alive, and it was clear that every single member of the cast was having a blast on stage.

The director of these powerful productions is Mr. Joseph Fisicaro, a history teacher at Cherokee, known by his cast members as Mr. Fiz. Mr. Fisicaro, who started working in Cherokee drama with the production of Singing in the Rain in 2011, says, “I loved, even when I was young, to put things together. I love taking something raw and putting it into an image of my own.” He explains that characterization is one of his favorite parts of the development of a play. He credits his high school director at Cherokee, Mr. Frank Guerrini, as a having had a great positive influence on him in terms of theater. Mr. Fisicaro, reminiscing on his high school days, says it was while in Mr. Guerrini’s choirs and plays that he learned how rewarding it is to put so many varied and talented individuals together in a single production.

On the topic of nostalgia, Mr. Fisicaro recalls how the Cherokee theater used to be before Cherokee South was built. The entire area to the right of the A hall in Cherokee North, which includes the present day Choir Room, band room, storage area, some classrooms, and the Recital hall, used to be a larger theater with the entrance at the North Lobby. Today’s theater seats roughly three times as many people as the original 500 seat Cherokee theater.

When asked about how Mr. Fisicaro decides the shows he wants to do, he says, “I need to see what I have, I don’t just pick blindly. I look at the actors I have.” He explains, however, that he never exactly knows how things will play out. For example, he says that every year he is amazed at certain auditions and discovers great new actors. So although he may have certain actors in mind to play certain parts in a play, he is always open-minded during casting. He goes through all the auditions seeking that “wow feeling” from an unexpected audition.

At every informational meeting for the theater program, Mr. Fisicaro emphasizes that one must try out for the part that they want to go for. He disagrees with any thought of “oh, so and so is going to try out for the lead and is probably going to get it, so therefore I won’t try out for the lead  .  . .” He says that he wants to have that feeling in his stomach that says “wow, this person needs to be on stage.”

So what’s the key to having a potentially great audition? According to Mr. Fisicaro, it is to differentiate yourself from everyone else who is auditioning. What makes you better? Great facial expressions? Great body language? Great projection of one’s voice? According to many actors in the program, Mr. Fisicaro plays close attention to one’s feet during an audition. Are they relaxed and confident? This means that the person probably has a good stage presence. This is just one of the many things the director has in mind when going through auditions. For an audition on the whole, Mr. Fisicaro says, “Get me emotional.”

The most intense time for the show is known as tech week: the week before the show. This week features daily rehearsals that often span from after school to 10 pm. One could guess that this week must make Mr. Fisicaro very tense. For him, it is quite the contrary. As stated, Mr. Fisicaro loves putting things together. Come tech week, all the pieces are finished, and his work is essentially done. He is done directing the actors, organizing the stage crew and lighting crew, and now he lets them all come together to finish the show.  Instead of feeling nervous or stressed, Mr. Fisicaro says that it is actually the most relaxing part of the development for him. He says, “I don’t get nervous. It is on the lighting designer, sound, on the actors; it is off me. I set all the pieces. It is the 2-4 weeks up to tech that are the toughest.”

And all the hard work that Mr. Fisicaro put forth in directing the show and building the pieces resulted, yet again, in a wonderful masterpiece of art this spring- Anything Goes.  When asked, Mr. Fisicaro claimed with immediate certainty that his favorite part of the production was the tap dancing number. He believes it stood out and will be remembered as truly magnificent in the storied litany of great Cherokee productions.

For the Fall Play at Cherokee this year, the Cherokee Drama Guild is going to put on White Christmas. For anyone interested in being a part of this great show, attend the informational meeting after school on Thursday, September 7th! It  will be at 2:45 PM in the Performing Arts Center in Cherokee South.