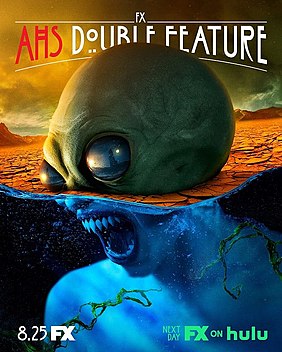 On August 25, 2021, the first episode of American Horror Story (AHS) Double Feature was released. This was the first episode of fresh AHS content as the last season finished Sept. 2019. Surprisingly though, the usually devoted fans are divided on the quality of this season.

Red Tide was the first half of the Death Valley Double Feature and we got amazing casting from the creators, Ryan Murphy and Brad Falchuk. We have returning members like Lily Rabe, Fin Wittrock, Sarah Paulson, Evan Peters, Frances Conroy, Idina Porter, Angelica Ross, and Leslie Grossman. Additionally, we also got many new members introduced into the series like Macaulay Culkin and Ryan Kiera Armstrong. Many, including myself, liked Red Tide. It was a creative and well-thought-out season; the characters really fit the theme of the season along with the plot. The idea that the black pills turning the residents of Provincetown, Massachusetts into talented monsters or talentless zombies was a very good concept that ended the section beautifully.

However, it’s the second half of the season, Death Valley, that provoked some controversial ideas and opinions.

Death Valley focused on the idea of alien abductions throughout the 1950s and 60s. President Eisenhower and Vice President Richard Nixon talk to the alien species about a contract promising modern technology to help fight in the Cold War, as well as including a modern timeline following four college students. These students and friends go camping in the Nevada desert and end up getting abducted and impregnated (even the males). While trying to figure out how they got pregnant, they get kidnapped and transported to Area 51 for further observation. After a long wait in between the 60s flashback story and a long wait between episodes, we finally figure out they’re pregnant with baby aliens and are helping a dying species of aliens find the perfect “vessel” to produce new babies.

This is a good way to capture the horror and paranoia people had during the 60s surrounding UFOs and alien abductions, but it doesn’t make sense for them to impregnate humans when they could be doing it with their actual species. The finale was very rushed and left no real ending to the story. After finding the perfect alien baby produced by one of the college students, they use her body as the producer. But when they produce enough babies, they would need a mother to watch over them. It doesn’t make sense why they need a human mother to do it when they have perfectly capable aliens to do it. So they just forced some random character to be the mother and the story ends. Again, it seems rushed and unfinished and might be the worst ending we have ever gotten in AHS.

Many critics are calling it the worst season; almost all of the episodes suffered, so hopefully next time Ryan Murphy will take more time to think through each episode’s plot before greenlighting it for production.