The Cherokee Scout • May 6, 2021 • https://cherokeescout.org/3354/features/education-during-the-pandemic-around-the-world/

Education During the Pandemic Around the World 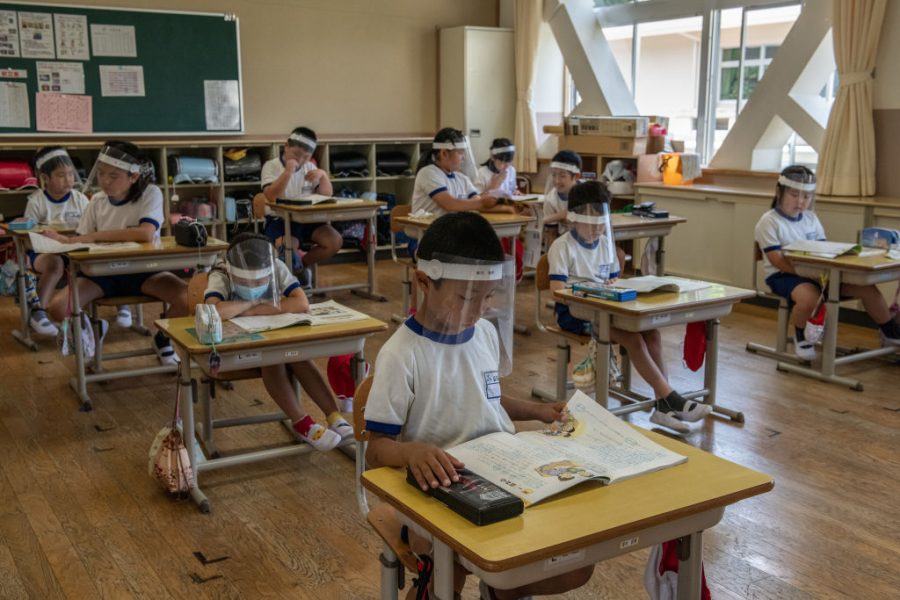 NIKKO, JAPAN - JUNE 03: Children wearing plastic face visors sit in class at Kinugawa Elementary School on June 3, 2020 in Nikko, Japan. Schools in Japan reopened this week after being forced to close earlier in the year by the Covid-19 coronavirus outbreak. Safety measures have been implemented throughout the country, including social distancing in classrooms, use of hand sanitiser, face masks and, in some cases, plastic face visors for students and teachers. (Photo by Carl Court/Getty Images)

The COVID-19 pandemic has affected everyone in different ways. People bunkering down at home, obsessive toilet paper buying, binge-watching TV shows, and much more. But what about students? Not just in the United States, but around the world, with varying ages? This article will be looking at the United States, United Kingdom, and Latin America, and the Caribbean.

In the United Kingdom:

On February 28th, fourteen schools in England closed due to students who had traveled from Italy and came home, not knowing that they were sick and spreading COVID-19. And things only got worse from there. In early March 2020, schools, nurseries, and colleges shut down in response to the pandemic. All in-person learning and teaching were not happening and students and teachers moved online. Primary schools began to open on June 1st beginning with young students and moving to older ones, yet on June 9th, the government said that older students (Years 7 and up) would not return to school due to fear of increasing the infection rate. Yet for a time before the second wave, things were good. Masks weren’t mandated because things were looking up. Transmission was low in schools and the over infection rate was low. People went out and enjoyed life. When the second wave hit, it hit hard. There was an emergence of a new variant in December 2020 and it led to school closures. Again. Even after Christmas breaks, schools were still closed and in many places, it still remains.

In the United States:

Despite being close to a year in, in terms of COVID-19, schools aren’t getting a break. Experts believe that schools may not operate ordinarily until the next school year, at the earliest. Many states in the United States are operating schools differently. For example, Delaware and Minnesota have schools open depending on the level of positivity in the state or locally. Illinois and Indiana are using the hybrid model of learning based on their state’s phase of reopening. Hawaii and Colorado are determining how open their schools are based on levels of infection, without specific metrics to measure the levels. In Washington and Idaho, recommendations are made based on case levels, yet decisions are being left to be made to local districts. Arkansas and Iowa are requiring a level of in-person learning.

At the beginning of the school year, many school districts had some form of hybrid or distance learning. Students living in or near poverty were more likely to start the school year remotely compared to higher-income peers and were more likely to continue remote instruction as the year progressed. Many students in rural communities faced internet issues, causing them difficulties completing assignments and attending class. And it doesn’t stop here, many students had to attend class through a cell phone, while it is ideal that students attend and complete classwork on a laptop or computer device. Many schools throughout the US also faced the challenge of debating whether or not to give students required assessments, like placement and developmental tests. Not only do these tests track student progress, but they also rank schools in accountability systems, decide whether or not to close a school, and funding, just to name a few.

Studies show that students may have less than two-thirds of their learning gains when they returned to school in the fall of 2020. The subject hit the hardest, is mathematics. Students of a minority group or of color, have an even greater learning loss. For all students, this may have impacts that extend into adulthood.

In Latin America and The Caribbean:

Over one-third of countries in Latin America and the Caribbean have a date to reopen schools. Yet that doesn’t hide the struggles continuing now. 97 percent of students in Latin America and the Caribbean have missed an average of 174 days of learning, four times more days of schooling lost compared to students around the world. They are on the edge missing out on an entire year of schooling.

Millions of vulnerable students may never return to school. And those without computers, internet access, or a place to learn, are experiencing a great challenge. Despite efforts from the government, 1 in 2 students in public schools has quality home learning and 3 in 4 students in private schools. With schools closed, it could cost up to 1.2 trillion dollars in eventual lifetime earnings for students deprived of proper education.