“Some Kind of Heaven”: An Artistic Look at Aging and Community 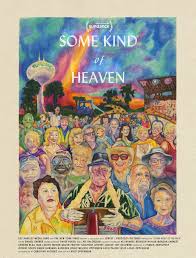 The New York Times recently produced a new documentary, “Some Kind of Heaven”, directed by Lance Oppenheim. Despite the title, and the film’s journalistic sponsorship, this documentary is not about politics, a utopian community, or the afterlife. “Some Kind of Heaven” follows four individuals, all sympathetic and empathetic in their own ways, who live, get involved in, and find conflict in The Villages, which is a retirement community in Florida whose population is nearing 100,000. Through these individuals, Oppenheim explores life for people in their sunset years, as they deal with finance, marriage, love, connection, and the meaning of life. The film is endearing in an unusually unique way, and its connotation with aging and death gives it a hauntingly beautiful resonance.

The film begins with a short introduction, where the many facets of life at The Villages is presented with stunningly clear cinematography, engaging interviews, and an objective eye. The film then introduces the viewer to four specific people living in The Villages. There’s Anne, who feels that her nearly 50-year marriage is beginning to fall apart. Reggie, Anne’s husband, has recently documented his own journey with psychotropic drugs, and is trying to avoid more trouble because of it. Barbara was widowed not long after moving to The Villages, and wants to get involved with the community a bit more and possibly find a new special someone. Dennis, who doesn’t live in The Villages, lives in his van and moonlights as a resident during the day, trying to find a rich woman who he will be able to find comfort in as his last years approach. Throughout the film, these four find conflict and change in The Villages. As Anne and Reggie attempt to fix their marital problems, Reggie faces drug possession charges, Barbara falls for a member of The Villages’ Parrothead group, and Dennis finds himself shut out of The Villages and begging for money to live on. The film, which talks about The Villages’ history and shows the real condition of life (which is by no means bad, but also not luxurious) for many of its residents, morphs into a dreamlike essay on the accomplishments and hopes of its four subjects.

Documentaries, with some notable exceptions, have no actors playing parts. And although this isn’t the case at all with “Some Kind of Heaven”, Oppenheim has chosen from the tens of thousands of Villages residents four people whose stories, actions, and behaviors not only interest the audience, but create a microcosm of elderly life and the desire to reach one’s personal American dream, even knowing that time is limited. Dennis’ financial problems, Barbara’s loneliness and attempts to find connection, Reggie’s brushes with the law and addiction, and Anne’s emotional pain as Reggie’s behavior worsens – these stories manage to find examples of many of the problems average Americans face every day, by using people from the one place where most people would expect such problems to be absent.

“Some Kind of Heaven” also includes gorgeous production details that richen the experience of watching it. The aforementioned cinematography, which shines the most in the first few minutes, remains beautifully tuned to its subjects throughout. Some shots bring the viewer to the same level and emotions of the inhabitants of The Villages, some are perfectly suited to show the quirkiness and uniqueness of some of the people and activities, and some show the backdrop of death and grief that penetrates the mood of many parts of the film. Death may not be the main focus of the four featured residents, but their actions and conflicts happen in part because of the looming threat of death, and seeing the undertone of mortality in The Villages – one could not expect anything else from a retirement community – forces the viewer to remember that, even when we want to just think about the resident’s successes and happiness.

Throughout the past year, we have seen many facets of our current life, both the good and (mainly) the bad, through documentaries. The pandemic, the Black Lives Matter movement, and 2020’s political tensions have all been shown with an objective, and sometimes cold, light. “Some Kind of Heaven” is different – using a topic that is not usually shown in documentaries or even television, and through it exploring the kinds of themes and feelings we have come to know recently. The film was obviously shot pre-COVID, but much of what we see has become strangely relevant – especially the ideas of isolation, marital trouble, and drug addiction. Lance Oppenheim may only be 25, but his understanding of the world and the human condition has proven him already as a great documentarian and somebody with as much wisdom and understanding as one of his subjects, who have lived through much of history.

“Some Kind of Heaven” is available to rent on most platforms for $6.99.