Amanda Gorman: A Bright Shining Star for America to Look to 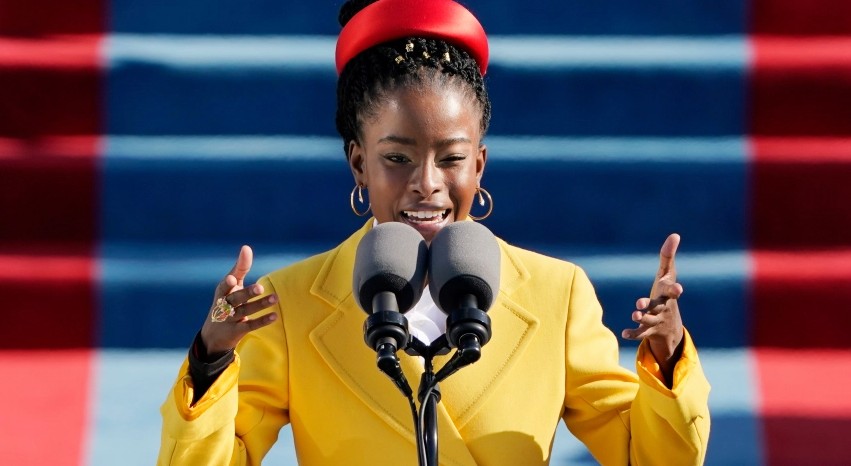 America fell in love with 22-year-old Amanda Gorman on January 22, 2021, during President Joe Biden’s Inauguration.  She eloquently delivered her beautiful poem entitled, “The Hill We Climb” and moved many deeply especially in light of the recent events at the Capitol that had unfolded.  Since that fateful day, her success has only grown but where did she start out?

Amanda Gorman grew up in Los Angeles and was raised by her single mother along with her two siblings.  Her mother, Joan Wicks, was a sixth-grade English teacher.  Her mother helped foster her love of reading and writing by limiting her amount of time to watch television.

Amanda first started to enjoy the art of poetry at age 8 but her life was not smooth sailing.  During her childhood, she had a speech impediment and an auditory processing disorder.  She was very sensitive to sound and went to speech therapy.  Amanda persevered and overcame these challenges.

She had many successes early on in her life as well.  She became Poet Laureate of Los Angeles at age 16.  She also earned a sociology degree at Harvard University.  Amanda is now the first National Youth Poet Laureate in history.  Since her performance at the Presidential Inauguration, her following has exploded.  Immediately after she recited her poem, she gained hundreds of thousands of Twitter followers.

She has had extraordinary success since.  For example, she received a cover on Time magazine.  Not only was she on the cover but featured in the magazine was her interview with Michele Obama.  Time has since named her to the 2021 Time100Next list.  She has also accepted a deal from IMG Models

Another great success she has had was during Super Bowl LV.  She became the first poet to perform at the Super Bowl.  She performed “Chorus of the Captains” before the game where she shined a spotlight on national heroes ICU nurse Suzie Dorner, Marine veteran James Martin and teacher Trimaine Davis. Fans will be able to continue to support and follow Amanda’s work as she has books coming out including “Change Sings: A Children’s National Anthem” and “The Hill We Climb and Other Poems”.

Amanda’s taking the nation by storm.  While Amanda’s future is not clear, it is definitely bright and with her gift, she is bringing much-needed joy and hope to many.