From Democracy to Military to Genocide to Coup 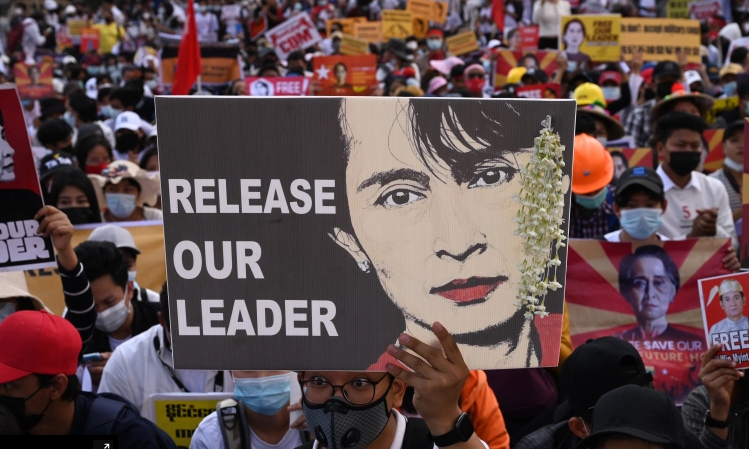 The people of Myanmar have been through a lot since their independence from the British in 1948, with multiple government takeovers, genocides, arrests, and what’s happening now. The Burmese people are in fear of another military takeover and are scared of history repeating itself, but what has really happened since 1948?

When Myanmar became an independent nation it had a democratic government until General Ne Win held a military coup to overthrow it in 1962. The military successfully gained control of the country along with business and industries and because of this, the economy went downhill very quickly and caused many problems like censorship and isolation. This style of governing continued until a pro-democracy protest broke out in 1988. The protests were suppressed by the military leaving 5,000 protestors killed or injured. From these events, a woman named Aung San Suu Kyi founded the National League for Democracy (NLD), and her new number one goal was to overthrow the military and make a democracy.

With both the economy in shambles and the military power, an election took place to determine the leader of the country. The NLD and Suu Kyi won but the military refused to believe the election results and placed Suu Kyi under house arrest until 1995. Aung San Suu Kyi was in and out of house arrest many times in the early 2000’s. In the early 2000’s the tension between the Rohingya and the Buddhist population in Myanmar escalated violently.

The Rohingya are a small Muslim group living in Myanmar. The Rohingya sided with the Allies in World War II and hoped of getting independence from Burma (Myanmar) as their own state. The Rohingya did not receive their reward and instead were blamed by the leaders of Burma for all of the country’s problems. With both the military and the Buddhist population of Myanmar enraged at the Rohingya, the military went and destroyed their villages and killed many. Some were forced to watch their family get killed or raped. The survivors of these genocides fled westward to neighboring countries like Bangladesh and found refugee camps where they now reside. More than 700,000 Rohingyas fled the country. The military denied responsibility for actions in 2017.

The 2017 genocide caught the United Nations (UN) attention but Myanmar denied anything that had happened in 2017. The democratic leader and founder of the NLD, Aung San Suu Kyi sided with the Burmese government and defended Myanmar. This shocked many as they thought that she would defend the Rohingya seeing as that could be a perfect chance to overthrow the military and establish her democracy. The international community was beginning to think that Suu Kyi didn’t deserve her Nobel Peace Prize she received back in 1991. Many fights continued between the Rohingya and the military and in 2019, Suu Kyi told the army to destroy the Rohingya. The following year the Union Solidarity and Development Party (USDP) wanted a redo on the election that took place on November 8th, 2020 and the NLD won again. With no errors or vote fraud, the NLD would have power over Myanmar.

The military refused to believe the election results and threatened to overturn the election and government.  On February 8th, 2021 the military launched raids where they arrested and detained Aung San Suu Kyi and President U Win Myint along with others from the NLD. With the military in power again, broadcasts, telephone lines, power lines, international flights, and many more services were suspended. In fear, the people went into cities like Yangon and the capital, Naypyidaw, to stock up on food, water, and other supplies. Many other nations like the United States and the United Kingdom said that the military should respect the election results and free Aung San Suu Kyi, NLD members, and other government officials.

As of February 18th, 2021 Suu Kyi is still detained along with other members of the NLD and government. Many Burmese citizens have taken to the streets and started protesting to release Aung San Suu Kyi and demand an end to military rule. These protests continued in cities like Yangon and Mandalay and were suppressed by the military and police. From independence in 1948 to the pro-democracy protests in 1988 to today, the fight for a fair and civilized government still continues.