Fashion Statements Create a Powerful Message During the Inauguration 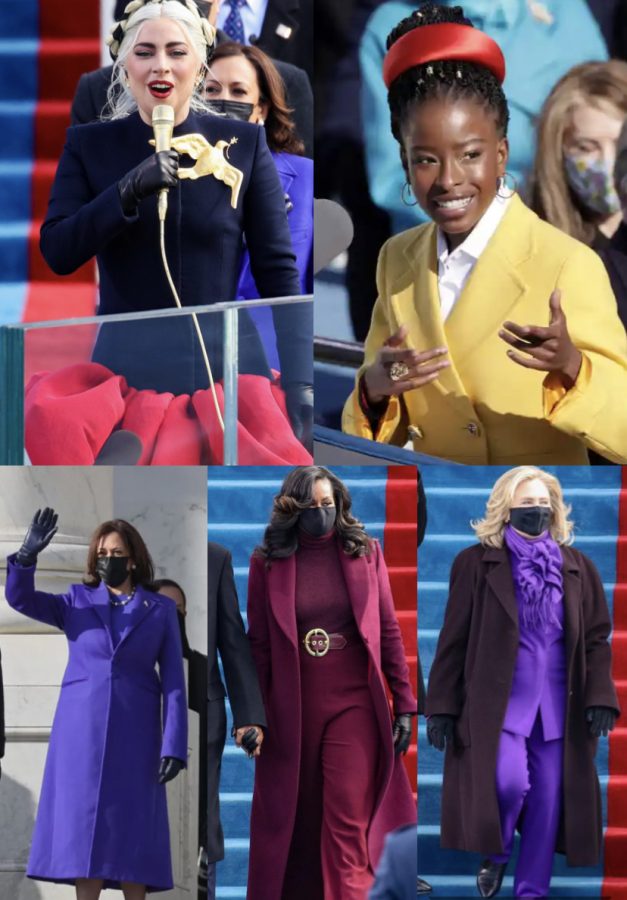 On January 21, 2021, Joe Biden and Kamala Harris were sworn in as President and Vice President of the United States. While this day was monumental for many reasons, including the nation electing its first female Vice President, fashion choices also played a big part in endorsing the message that the Biden Administration wants to project to Americans and the world.

The most memorable statement made seemed to be a combined one involving Vice President Kamala Harris, Former Secretary of State Hillary Clinton, and Former First Lady Michelle Obama. The three women were seen wearing different shades of purple and burgundy. Harris appeared in a vibrant purple coat and matching dress, Clinton in a suit a similar shade of purple, and Obama in a stunning burgundy pantsuit accompanied by a matching coat. The choice of hues could be a nod to the need for unity and peace in the United States, as purple may symbolize the red and blue parties coming together as American citizens. Harris also reportedly had a personal reason for wearing purple; she was honoring Shirley Chisholm, the first African American woman elected to Congress as well as the first to run for president.

The sea of purple seen at the inauguration was not the only meaningful fashion statement. Lady Gaga, who sang the national anthem before Vice President Harris and President Biden were sworn into office, is known for her unconventional outfits at many public events. At the inauguration, she toned her eccentric style down and opted for a black and red dress. The most prominent addition to her outfit was a large gold pin in the shape of a dove.

While some speculated on social media that this choice was a tribute to the Mockingjay symbol of the Hunger Games franchise, Lady Gaga said in a tweet showcasing the pin, “A dove carrying an olive branch. May we all make peace with each other.”

Lady Gaga, like Harris, Clinton, and Obama, is promoting peace within the country.

One of the most standout performances of the inauguration was that of Amanda Gorman, the 2021 Inaugural Poet. Gorman explicitly stated that she wore every piece of her outfit for a reason. Her unique choice of a bold red headband and a bright yellow coat stood out amongst her peers.

Gorman told Vogue, “I’m also wearing a yellow coat, which is my own nod to Dr. Jill Biden, who was the one who recommended me in the first place, and I’m so honored by that. She said, ‘I saw this video for you and you were wearing yellow and I loved it.’”

While reading the poem, Gorman also wore a ring with a caged bird, a gift from Oprah Winfrey to symbolize Maya Angelou, a previous inaugural poet herself.

It is evident that this election was like no other, and the Biden Administration acknowledges that. As President Biden said in his speech, “I will be a President for all Americans”: It’s clear that he is passionate about helping the American people as a whole.

Kamala Harris, Hillary Clinton, Michelle Obama, and Amanda Gorman are prime examples of promoting peace and sending messages unconventionally. These women wore specific outfits at the inauguration to send a message of domestic tranquility to Americans and they were quite successful in doing so.