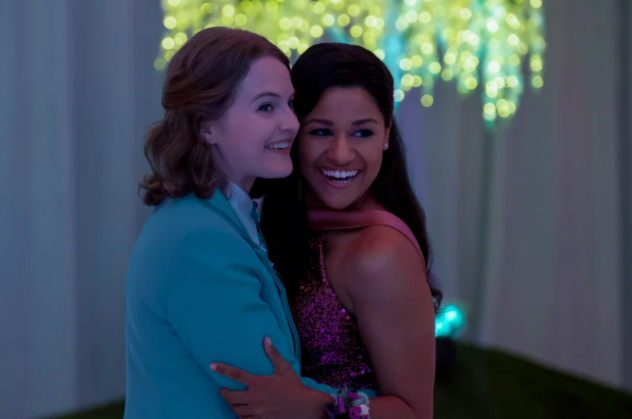 On December 11, 2020, Netflix released a movie called “The Prom” starring Jo Ellen Pellman, Meryl Streep, James Cordan, and Ariana DeBose. “The Prom” is a musical about a teenage girl (Emma) not being allowed to take her girlfriend (Alyssa) to the prom. Then a few Broadway stars (De De, Barry, Angie, and Trent) who need good publicity come to Indiana to advocate for Emma.

“The Prom” is based on the sad occurrence that happens all over America where LGBTQ+ youth are not allowed to go to their high school prom due to homophobia. Emma and Alyssa’s story is extremely similar to real-life high school students’ lives as they deal with homophobia in their schools.

The musical first premiered in 2016 in Georgia before moving to Broadway in 2018. The Broadway show closed in August of 2019, but that was not the end of its story. Netflix started filming “The Prom” and was mostly unaffected by the spread of COVID-19, so it was able to be released in 2020. Although the musical and the movie adaptation have some differences, fans of the original can still enjoy this version as much as the original musical.

With stars like Meryl Streep playing De De Allan, James Cordan playing Barry, Broadway star Ariana DeBose playing Alyssa Green, and Jo Ellen Pellman playing Emma, this movie is packed with talent anyone can find entertaining. This movie has amazing representation for groups of people that are not often in the mainstream media.

Check out “The Prom” on Netflix, or go to these links for more information about the film: https://time.com/5919651/the-prom-netflix/, https://www.today.com/popculture/prom-netflix-based-true-story-today-t203617