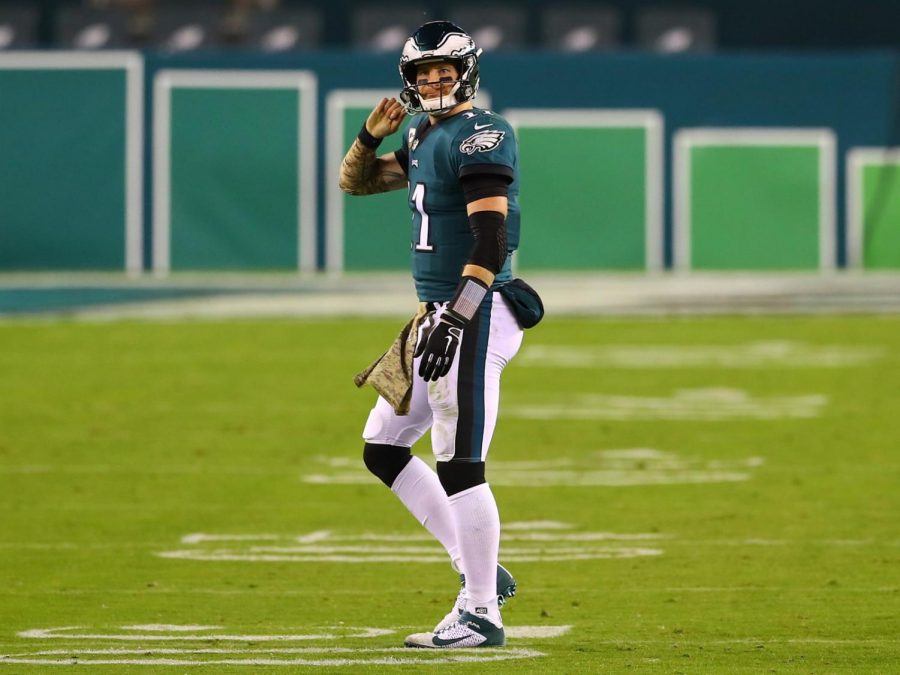 Carson Wentz walks off of the field after a play.

Almost four years ago, there was a time of greatness where Eagles quarterbacks Carson Wentz and Nick Foles were the faces of the league. This power dynamic led the team to the playoffs and subsequently earned them the 2018 Super Bowl title. Not only did this end the drought in Philadelphia football, but the fans’ confidence in the Eagles was also once again, after so long, restored.

Forwarding to present-day, the Eagles have a record of 4 – 8 -1 due to the unpredictable regression of Carson Wentz. In order to understand the stark difference that three years has made to the Eagles team, we must look at Wentz and how he plays the game. In 2017, Wentz played as a top-tier quarterback and had a healthy offensive line who gave him plays to scramble when needed. But, after injuring his anterior cruciate ligament, tearing his ACL, and injuring his head, he was benched for most of the 2017 season. Despite these injuries, the offensive line was able to hold and bring glory back to the Eagles.

In 2020, he still had his healthy line to protect him. The difference was that injuries along the offensive line created problems in weeks four and five, causing the team to regress severely. This led to Wentz forcing football throws and making petty mistakes, angering myself, other fans, and even the owner.

After years of failure and fed up with such a chaotic season, the Eagles head coach and management started rookie quarterback Jalen Hurts. Against the New Orleans Saints, who have the number one defense in the league, Hurts allowed just seventeen points per game. He also broke the Saints’ 55-game streak of not allowing a 100-yard rusher. In just three years the Eagles organization has been through a rollercoaster of events with Hurts bringing new promise to the team’s future, leaving Wentz as a backup quarterback and “straining” his relationship with Doug Pederson.