“Sound of Metal”: A Drummer’s Journey Into Silence 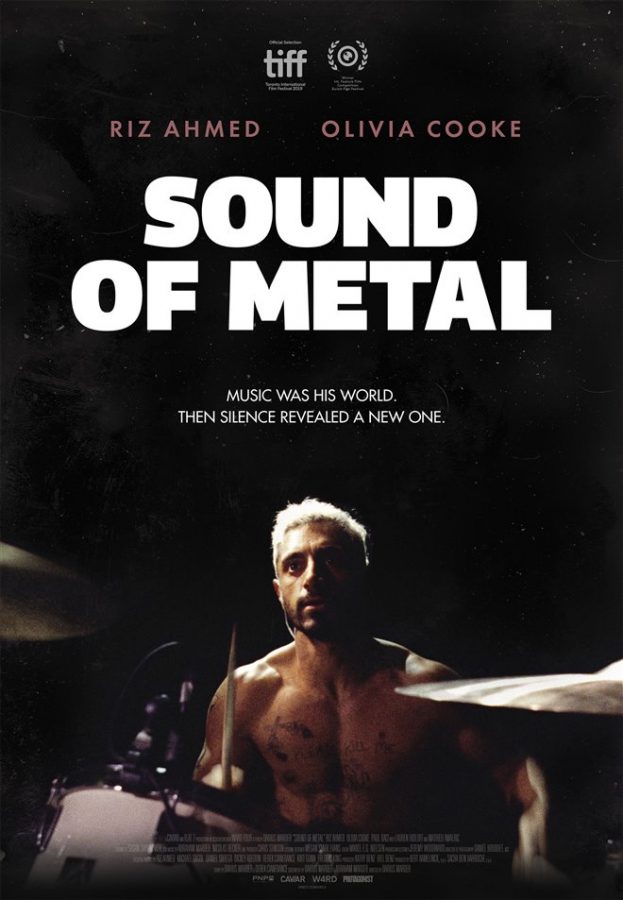 Darius Marder’s feature debut, “Sound of Metal,” contains one of the most original and inclusive plots of the year. The film follows metal drummer Ruben Stone (Riz Ahmed in what may be his finest role) as he rapidly loses his hearing and is torn between the worlds of the hearing and non-hearing, exemplified by his girlfriend/bandmate Lou (Olivia Cooke) and non-hearing community leader Joe (Paul Raci). Its themes of finding identity and navigating deafness make it one of the most insightful, and for some, one of the most relatable, movies this year.

The film starts out with a scene of Ruben drumming loudly alongside the screaming vocals of Lou. After a few more minutes of seeing Ruben and Louise living in an RV and traveling to their next gig, Ruben first experiences his hearing loss. Quickly, Ruben loses the majority of his hearing and falls into despair, sitting hopelessly in a diner with Lou (where we learn he’s a recovering drug addict). Lou then takes Ruben to a house for deaf recovering addicts overseen by Joe, who lost his hearing in Vietnam. Ruben, reluctant at first, spends his time amongst the members of this community, doing chores, writing his feelings down, and learning American Sign Language at the nearby school for the deaf. He sells the objects that represent his old life, like his RV and stereo equipment, in order to pay for a cochlear implant and to reunite with Lou, who has moved to France where her father lives.

The standout actor of “Sound of Metal” is its lead, Riz Ahmed. His portrayal of a man who is losing all hope, slowly gaining it back while battling personal demons, and eventually accepting his new circumstances, provides one of this year’s best performances. Ahmed’s intense involvement with Ruben’s story allows him to fully explore what Ruben is going through and also enables him to give a sincere performance. His wild expressions perfectly encapsulate Ruben’s mindset. His straight-on delivery of lines helps to show the sincerity and seriousness of the situation: “Today is not a good day,” Ruben tells Joe when he first meets him.

Along with Olivia Cooke, Paul Raci (who grew up with deaf parents), and a large cast of both hearing and non-hearing supporting actors, “Sound of Metal” is a showcase of acting that allows its script and its performers to coexist and tell a great story.

Ahmed’s performance is only heightened by the exquisite sound design displayed throughout the film. Sound in a film usually serves the purpose of allowing the viewer to hear the important sounds of the film, such as dialogue, music, and important sound effects, against less important noises in an agreeable balance. However, “Sound of Metal” uses sound design to its advantage, allowing the audience to experience Ruben’s hearing loss and empathize with him. From the first scene of Ruben experiencing severe tinnitus and hearing loss in an ostensibly isolated incident, the sound design fluctuates between normal sounds and sounds heard (or sometimes not) by Ruben. As the film switches in and out of Ruben’s perspective, the sound design becomes increasingly blocked as his condition worsens, it becomes silent after he gets his first surgery towards cochlear implants, and back to being vibrant as we switch back to a more third-person perspective. “Sound of Metal” has taken an ignored aspect of filmmaking and turned it into one of its most important, creative, and innovative features.

“Sound of Metal” is a film that puts an empathetic spotlight on an often overlooked community. A story such as this aims to tell the protagonist’s story by showing the audience their struggles and resolutions. Darius Marder, however, has taken it a step further and has immersed us in Ruben Stone’s newfound world. He does this by taking us through everything he sees and feels, along with everything he tries to hear. This marks Marder’s first venture into feature narrative filmmaking. By creating a powerful first film, he has shown the potential to become one of the finest new filmmakers of the coming decade.