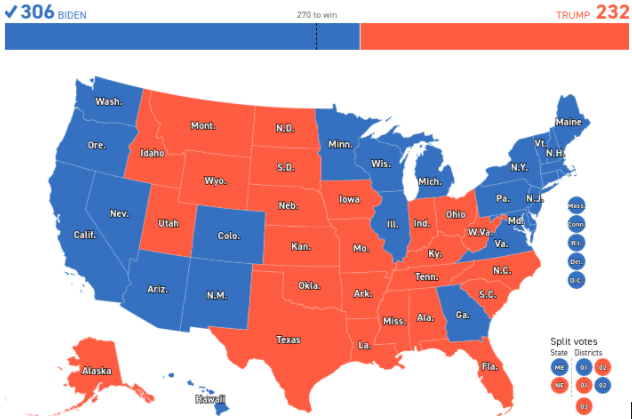 This year’s presidential election against Joe Biden and Donald Trump was unlike no other. Due to the COVID-19 pandemic, many Americans voted by mail before election day. Others, on the other hand, preferred the traditional method of voting in person. Either way, the votes were counted. However, certain states ran into difficulties counting their ballots efficiently, since certain regulations allowed some ballots to arrive after election day. This made this election quite like no other since the true winner of the election wasn’t revealed until Saturday, November 7th. To be specific, that was 4 days after election day! So, how exactly did this election play out?

The main issue on revealing the winner late was because of the mail-in ballots. Due to the virus, many more people were either required to or chose to vote by mail. However, some states, including Pennsylvania, were not allowed to count them until election day. The people counting the ballots were not prepared for how many ballots were sent in, so in certain states, it took days to count them. In North Carolina and Georgia, it took over a week. So, this affected when the winner of the election was announced.

After four days of waiting anxiously for the winner, Joe Biden was elected the next president of the United States. This was decided by a process called the Electoral College. The Electoral College is a system that the U.S. adopted where each state has a certain number of votes or electors. If a candidate gets the most votes in a state, they win all the electoral votes for that state. The required number of electoral votes a candidate needs to win is 270. Certain states, for example, California and Texas, have a substantial amount of electoral votes. So, it is crucial for a candidate to win either of those states. As of November 12th, Joe Biden has a total of 290 votes, and Donald Trump has 217. Since Biden has reached the required number of votes, he is declared the winner. Georgia and North Carolina have yet to reveal their results, so the numbers may change. However, these upcoming results are not as crucial because Joe Biden has reached 270 votes. This election is historic because over 150 million Americans cast a ballot in this election. This is the most ballots ever cast in a U.S. presidential election. As of November 12th, Biden has received over 77 million votes, winning him the popular vote.

This election is also historic because Kamala Harris is the first woman ever to be elected as the Vice President of the United States. Harris is truly unique because she is a woman of color. Specifically, she is of Jamaican and Indian descent. This is a huge stepping stone for America since it creates more diversity within the government. Ever since 1789, all of America’s presidents and vice presidents have been white males. The only exception is Barack Obama, who was elected president only 12 years ago. Kamala Harris proves to the country that certain political positions are not designated for men. Women are capable of being elected into those positions. However, there are still many challenges ahead about accepting women and people with different ethnicities into politics. Diversity is an extremely hard concept to achieve, especially in politics. Hopefully, Harris as vice president can give many young women in this country hope that they can be like her someday.

In conclusion, this election is truly one that belongs in the history books. Not only did the results take forever, but there were also a historic amount of votes cast. Also, the U.S. finally has a woman vice president! This great milestone proves that anyone in America can hold top government positions. It shows how far we have come since 1789, and how much we can achieve in the years ahead.

To find out more information about the electoral college, click here: https://www.history.com/news/electoral-college-founding-fathers-constitutional-convention

You can find more information on the election here: https://www.politico.com/news/2020-elections