Knives Out: Whodunit at the Theater 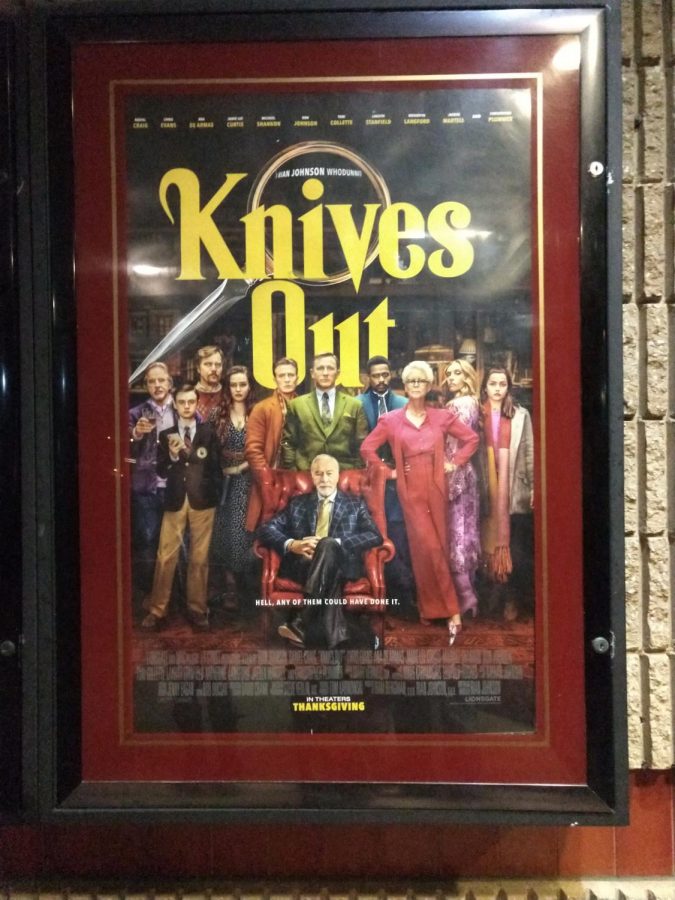 Knives Out Poster at AMC Marlton 8

Near the climax of Rian Johnson’s murder-mystery movie Knives Out, private detective Benoit Blanc, as portrayed by Daniel Craig, describes the ongoing case with a confusing anecdote concerning donuts. This quote summarizes perfectly what Knives Out is like: convoluted at times, but consistently original and funny. Knives Out is perhaps the year’s most original blockbuster, with its star-studded cast and a riveting, comedic script.

The film’s first act mainly involves the family of reclusive, eclectic mystery author Harlan Thrombey (played amazingly by Christopher Plummer, even in his 90s) being questioned by the police after his violent murder. Jealous siblings, greedy in-laws, and quirky relatives answer questions for the equally eclectic Benoit Blanc (who Daniel Craig plays with a surprising accuracy.) We see many sides of these characters throughout the looping interviews, and eventually we have enough information to go on and get some movement and action in the second act, as Blanc investigates the house with policemen and a prime suspect, played by newcomer Ana de Armas. The script intelligently weaves serious plot points with impressive jokes and gags that make Knives Out a truly fun experience, with all jokes and twists coming to a head in the climax: revealing the murderer’s true identity at long last.

Although many well-known, celebrity actors and actresses play their characters very well in Knives Out (Plummer, Craig, de Armas, and Jamie Lee Curtis at the top of their game), the acting is best as a whole, with one ensemble cast each doing their part to make the wild story as believable as possible. Their efforts have paid off, too, as Knives Out earned a SAG nomination for best ensemble cast. Each actor throughout the film comes to be seen more like their character than themselves. Rian Johnson and the actors share the weight of the film from the first scene, finding the body, to the revelatory final shot.

Knives Out’s exemplary script, inventive director, and dynamic ensemble cast help propel a funny murder mystery from just being another big-budget film to one of the most creative and memorable films of 2019. It deserves much more buzz than the Oscars and other award shows gave it. As time has shown, the movies we remember throughout time are the fun, inventive, and creative ones, and not necessarily the ones that have won Best Picture or other awards. Knives Out falls perfectly into the former category.