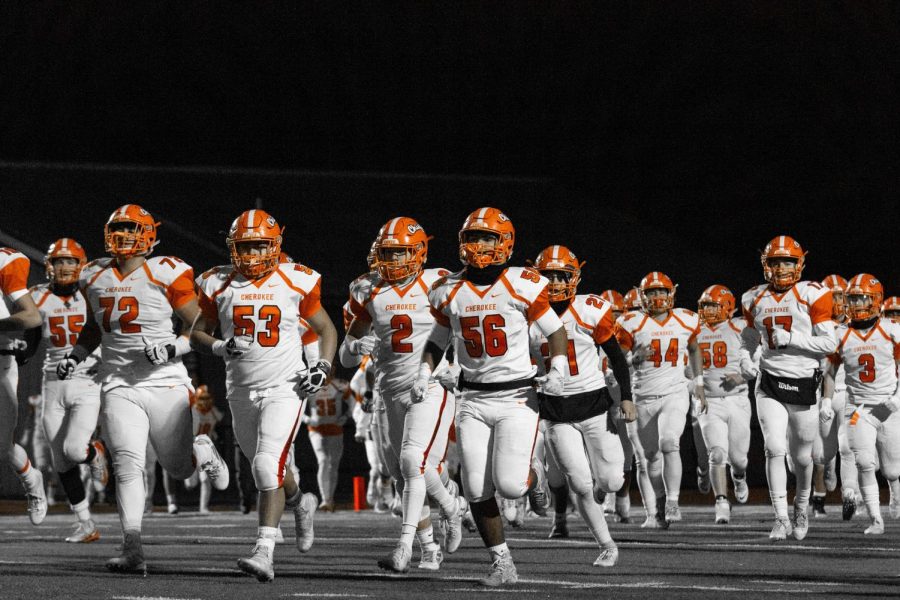 Cherokee gets ready to take the field against North Brunswick in the playoffs.

The 2019 Cherokee football season this year was truly a “revenge tour,” a term coined by the student section Instagram @chs.studentsection2020. Last season, Cherokee Football struggled. They had only two wins in the regular season. Following last year’s lackluster season, spirits for the upcoming season were at an all time low. However, this year the team drastically improved. The Chiefs, led by second-year head coach, Coach Glatz, had some young players that added another element to the team. Quarterback Billy Osborn brought hope to the turf this year, playing a fundamental role in Cherokee’s move to the finals. The Chiefs were inspired to go out and win. In their first game with Washington Township, the players dominated the field, winning 51-6. After that, the Chiefs played some tough teams: Shawnee, Williamstown, St. Augustine Prep, and Lenape. Cherokee ended the regular season with a record of 3-5. With the regular season over, the Chiefs placed all of their attention on the playoffs.

On November 8, 2019 Cherokee kicked off the first round of the playoff games at Manalapan High School. Going against the Manalapan Braves was no walk in the park for Cherokee, seeing as the opposing team held a record of 5-2. Additionally, temperatures dropped down to a frigid 30 degrees, raising the bar even higher. Caden Burti received 135 yards throughout the course of the night with the biggest reception of the game. Quarterback Billy Osborn led the Chief’s defense to the game winning touchdown in the fourth quarter, finalizing their win of 12-10. The parents, cheerleaders, and the marching band, cheered the Cherokee football team off the field as they advanced to the second round of the playoffs with a record of 4-5.

November 15, 2019 marked the second round game of the playoffs at North Brunswick High School. The North Brunswick Raiders held an intimidating record of 9-1. But the Cherokee players weren’t fazed by the scores of their competitors. Burti caught a first down in the air, which sealed the 13-6 lead that Cherokee didn’t lose for the remainder of the night. With 5 minutes and 22 seconds still left in the game, North Brunswick’s Leon Lowery suffered an on field

injury. He had laid face down on the field for 15 minutes, later being placed on a stretcher as both teams stood together to watch him exit the field and pay respect. Before resuming again, North Brunswick’s student section chanted Lowery’s name as their team warmed up again. Cherokee ended the game 41-25, opening halftime 20-6, and advancing to the third round of the playoffs with a record of 5-5.

With Cheorkee’s last home game of the season and the third round of the playoffs, the Chiefs took on the Kingsway High School Dragons. November 22, 2019 marked the Central Jersey Group Five finals. With Cherokee’s 5-5 record, home field advantage, and the massive student section, it seemed almost possible that their revenge tour would be successful. Osborn scored two touchdowns and assisted in two more which sealed the deal on Cheorkee’s CJG5 win against Kingsway, ending with a  score of 35-18. The fifth-seeded Cherokee Chiefs won their 11th sectional title, the most recent of which was in 2014. In the final moments of the game,

the student section walked down off of the bleachers and towards the gate onto the field. As they anxiously awaited the 0:00 of the clock, Cherokee knew the game was over. The student section stormed the field, which turned into a mosh pit of orange and white spirit. Rising above all the cramped bodies, a “Chief Nation” flag flew high above the crowd, celebrating the long wished for win from the Cherokee football team. Cherokee would move onto the final round of the playoffs against Williamstown with a record of 6-6.

The Chiefs were motivated to put all they had down on the turf in Rutgers Stadium on December 7. The game started off with a moment of silence for Micah Tennant, one of the victims of the shooting in the Pleasantville vs Camden football game in November. Once the national anthem was over, the two teams got to work. Osborn was able to squeeze in passes to Burti and Ty Bartrum, which then became touchdowns. Unfortunately, Williamstown was the better team who won with a final score 30-14. Cherokee’s football players were upset by the devastating loss against the Williamstown Braves, which resulted in them losing the New Jersey State Championship Group Five game. Nevertheless, Cherokee football has a bright future as second-year head coach, Brian Glatz, settles into coaching on the turf for the varsity football team. Williamstown ended the season with a record of 12-1, bumping Cherokee’s record up to 6-7 for the 2019-2020 season.

The 2019-2020 season for Cherokee football was truly a revenge tour. From upsetting the top-seeded team in the second round with only four wins under their belt and winning the Central Jersey Group Five finals, Cherokee put their past behind them this year and only focused on the future. Seeing the season unfold from the stands was truly something to behold.