Harriet: A Story Everyone Should Know 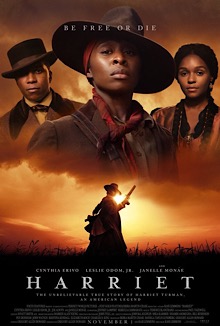 “Harriet,” released on November 1, 2019, beautifully captures the extraordinary life of abolitionist, Harriet Tubman. The film begins with Harriet’s life as a slave and follows her from her escape to freedom as well as everything that came afterward. Harriet’s accomplishments in guiding countless others to freedom are portrayed on the screen in such a way that turns America’s dark historical past into a captivating and informative narrative.

The movie may be melancholic. However, the film simultaneously manages to be absolutely ethereal and awe-inspiring. The cruelty and sadism of historical figures is contrasted with the heroism and kindness of others, which turns the film into a constant emotional rollercoaster: a battle between light and dark.

Cynthia Erivo shines in her role as Harriet. When singing, her voice is rough with all the beauty of being natural. Her role as a savior of so many people makes her a true angel.

Joe Alwyn stars as her slave owner in the film. He is so good at being bad that you hate the character, but love him for being such a good actor.

Watching this movie is both heartbreaking and uplifting, but deeply worth the ride. It is a true must-see.