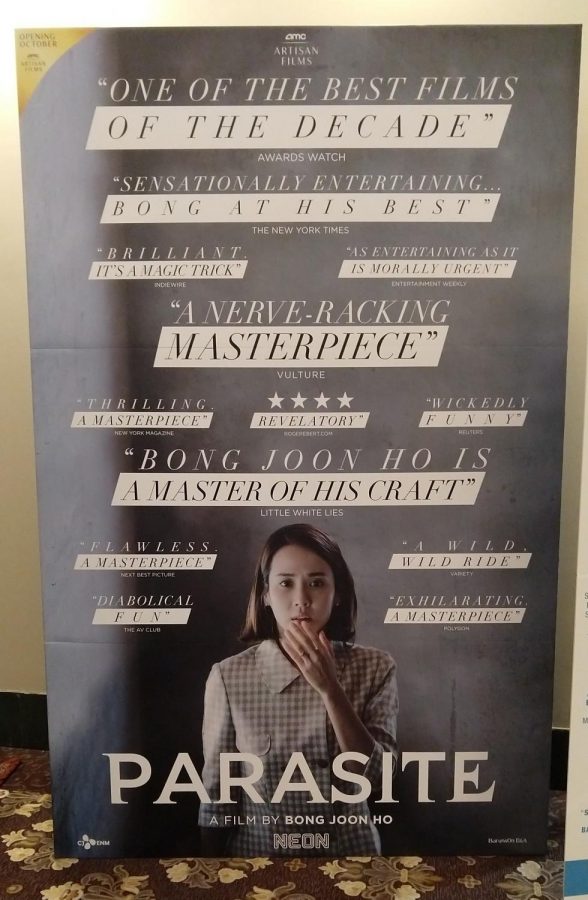 At first look, Korean director Joon-Ho Bong’s new film “Parasite” may not look like much. The story is one of two families in different social classes whose lives clash by fate. Yet, a deeper investigation shows a multi-layered film that tells a dreamlike parable of class inequality in modern-day South Korea.

The film opens with a comedic moment: we meet the poor Kim family, led by the patriarch Ki-taek (Played by the great Korean actor Song Kang-ho,) who live in a semi-basement in the slums of South Korea. The two Kim children, teenagers Ki-woo and Ki-jung, are struggling to find a new WiFi network to leech off of from their phones.

The film continues this form of weaving comedy into a serious plot: Ki-woo lands a full-time job from a friend tutoring the daughter of the rich Parks, along with a landscape rock meant to bring great wealth. His tutorship branches into a plot to get jobs for all of the Kims, taking advantage of the family’s gullibility.

The characters we meet throughout the first half of the film all play a part in the symbiotic relationship between the two families: The Kims are made up of the serious, yet light-hearted patriarch Ki-taek, his wife, the courageous and hard-working Chung-sook, smart, cool, and honest son Ki-woo, and the mischievous genius daughter Ki-jung; the Parks include stern businessman Dong-ik “Nathan” Park, gullible wife Yeon-kyo, infatuated and mysterious daughter Da-hye, and crazy son Da-song. The personalities of these two families, along with the forgiving housemaid Moon-gwang, create a microcosm of classes in South Korea, while also becoming an important part of the film’s story.

“Parasite” is a film about the inequality of class in South Korea. It sends its message through sudden genre changes and blatant metaphors. The satirical comedy full of amusing conversations and high jinks then turns into a dramatic thriller in a matter of minutes. “Parasite” is one of the most thought-out, meticulous, and engaging films of the year, if not the decade. It is sure to cling to the mind of its viewers, and can be enjoyed by anyone, even people who don’t usually watch foreign films. It is a film that will be remembered for years to come.