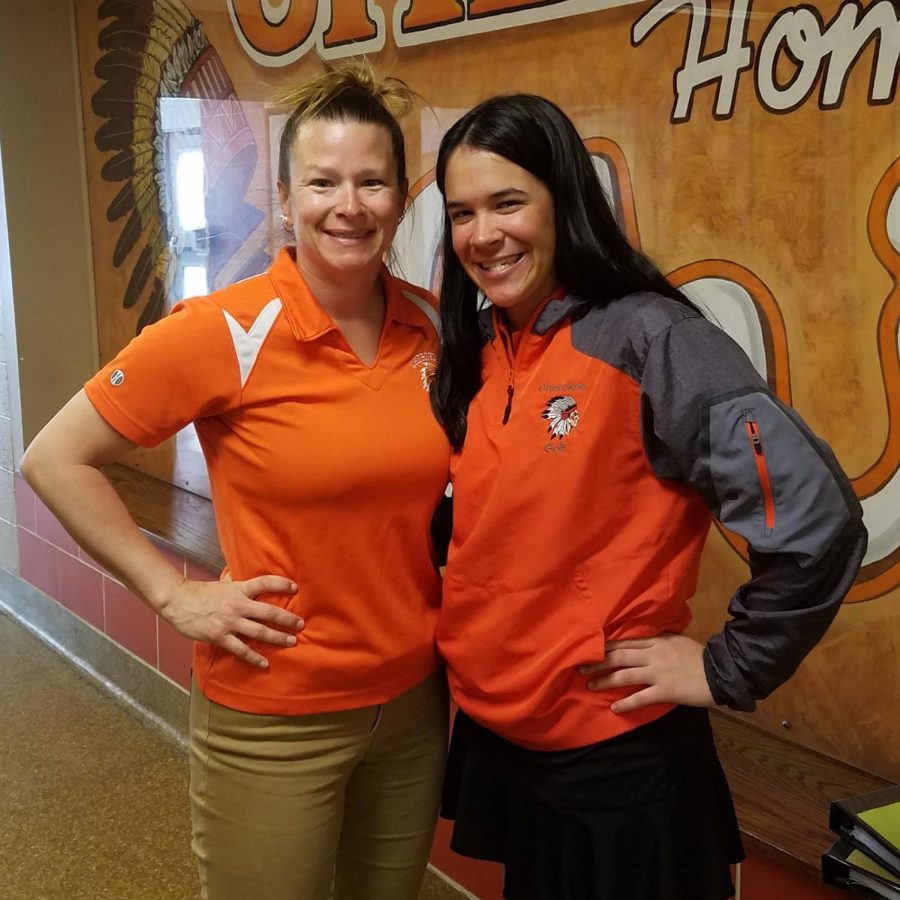 Coach Mrs. Megan Boland (left) and senior golfer Morgan Hambrecht (right) have been instrumental in the creation and success of the team

A new team has emerged from Cherokee’s vibrant athletic program: Girls Golf. The team was founded by Morgan Hambrecht, a senior and varsity player, and is coached by Ms. Megan Boland, a Health and P.E. teacher at Cherokee. From the beginning, the team has offered an increasing number of girls the opportunity to get onto the golf course and better their skills.

Playing golf on teams differs from the individual version of the game. Six players from each team golf nine holes, and the lowest four scores for each hole, summed up, equal the team’s final score. The team’s record last year was 2-9, and this year so far is 2-6. In this season, two of those matches were lost by a combined five strokes. In a game where scores often reach above two hundred strokes, “it just shows us that we’re right there with the other teams,” says Coach Boland.

One of Cherokee’s varsity players is Morgan Hambrecht, the senior who established the team during her sophomore year. When she was six, her father bought her first set of golf clubs, and she was hooked. Even though Hambrecht deserves her share of credit for having the idea and making it a reality, she is not the only one invested in the program. Her teammates, who have become close friends, and Coach Boland have also played important parts along the way. Hambrecht wanted to make sure that Coach Boland especially got her due: “Shoutout to Coach Boland…she really built the team up.”

Coach Boland also started golfing when her father introduced her to the sport as a girl. She competed and performed well in several local tournaments, but at that time, there weren’t enough women in golf for her to see a path forward. Coach Boland’s passion for the sport idled until the job of coach became available, and on her second bid for it she was successful. Her goal for the team is simple: “I want them scoring lower, obviously, but I just want them to get to a spot where they’re comfortable being out on the golf course with other people.” In fact, golfing with others can be a rewarding experience, as all the girls are genuinely friendly with one another, even those on opposing teams.

Hambrecht had always been passionate about golf, and she wanted for other Cherokee girls to experience the sport as well. So, she took the initiative and created the girls team: “When I was a sophomore I went to the Board of Ed[ucation] meetings…and I basically pitched the Girls Golf Team and made speeches.” Her efforts were successful, and the team has been growing ever since. This season was the first that girls golf has been a varsity sport, and the team added five new members.

Next year, there will be an information meeting one month before the season begins in March. For those interested in becoming a part of this incredible sport, contact Coach Boland for more information.