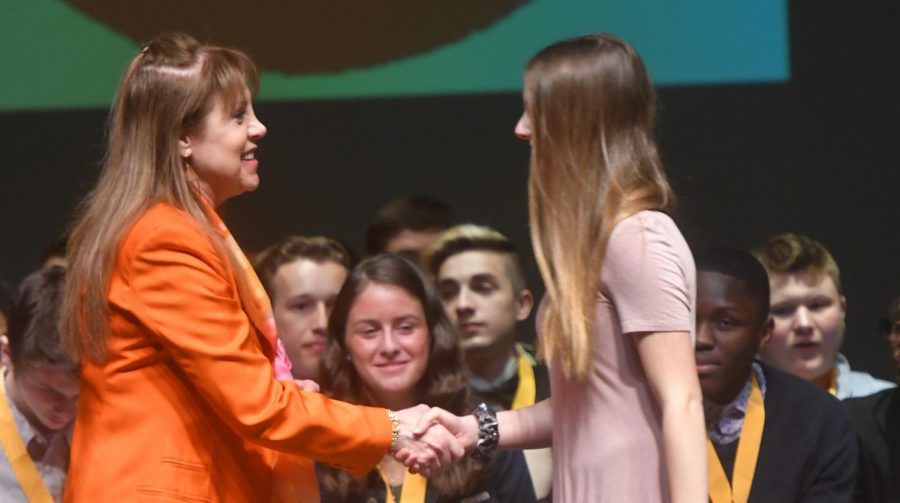 Mrs. Charlesworth congratulates one of many People's Choice Award recipients

The People’s Choice Awards at Cherokee have been an ongoing annual tradition for approximately  22 years. Each year teachers and staff recognize students who have showcased outstanding characteristics and those who have worked hard to make their school environment a better place.

This tradition was brought over to Cherokee when Mr. Lamplugh and another staff member went to another school in the district and found out about Renaissance. This was a student run program and its genesis, its reason for being was to make students feel that sense of belonging, even in larger schools.

The advisors of Renaissance at Cherokee send out an email towards the end of each school year asking teachers, coaches and staff to give the name of a student they want to nominate. When students are selected for this award by one teacher or staff member of Cherokee, it is up to that specific staff member as to why that student deserves that award. This could mean the student helped another student, they were actively involved in a class or club, or they just exemplified  good leadership skills. The name of the teacher who selected that student remains anonymous until the night of the ceremony.

Teachers often select students who stand out to them in their school, or they see something in that student that truly inspires them, that student who makes them think, ‘This is why I do what I do.’

“All of us counselors, we have hundreds of students each year and we can only select one, whether that is 9th, 10th, 11th, or 12th grade. So for me it’s that  one student has definitely stood out to me the most just for being an awesome person. And over the years, those selected students will be the ones I remember most,” Mr. McMichael said.

What makes this award different from others such as NHS or an athlete of the week is that it isn’t based on a checklist and there aren’t any requirements in order to be recognized. The purpose of it is to award a student who exude quality characteristics and inspire their peers. When a student is recognized, it really means a lot to them, and it’s such a meaningful surprise to that student.

“I wish every teacher really knew how much it means to our students to receive an award from them. In particular, when I think about a valedictorian I had a few years ago, I know he received numerous academic awards and Honors awards. Yet, everytime I see him he talks about his People’s Choice Award. It has that type of meaning to both the student and the parents as well,” Mrs. Charlesworth said.

Not every student can be a valedictorian or a varsity athlete, but everyone can be a kind, spirited and motivated person. That is something to be proud of, and that is what the People’s Choice recognizes students for.

“If I were a parent sitting in the Performing Arts Center watching my child get an award, the People’s Choice would definitely mean the most to me. It tells me that I have done my job as a parent and that my child is exactly the good person I’d hoped they’d become,” Mr. McMichael said.

It truly showcases who that person is when they stand on the PAC stage on the night of the ceremony and receive the medal from the teacher that chose them. They share a special moment with that teacher who has truly impacted their lives and saw something so special in them. Realizing that this person saw something in you other than a test grade or a PR is a spectacular feeling for anyone.

“It shows that student that they matter, they were noticed and they were just as good as everyone else, that is what we mean when we say ‘Always a Chief.’ You don’t have to be on top to be a Chief. It’s about feeling a sense of being a part of something greater,” Mrs. Charlesworth said.

Each year, when students are selected for this award and they gather in the Performing Arts Center for the ceremony, there is a sense of connectivity amongst everyone. Each student is called up one by one by the teacher or coach that selected them, being a surprise until that evening, and are read a prepared speech in which reveal the reason they were picked for the award. That teacher then awards the student the medal around their necks and walk into the hall for a picture hey can take home and cherish forever.

This is another way that the Cherokee environment helps bring kids and families together and strengthen the community as a whole. Though Cherokee is one of the largest schools in the district, it feels like one of the smallest and that is so meaningful and such a great honor to each and every student that has ever passed through the school.