Anthony Foster: His Podcast, His Personality, Your Peer 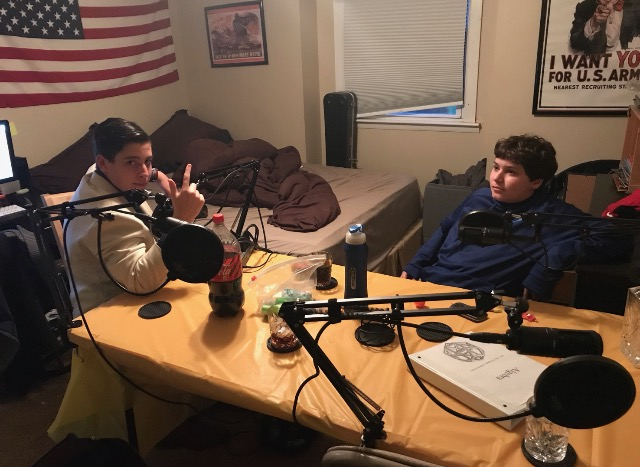 Anthony Foster: suit aficionado, podcast founder, member of many clubs, and possible future professor of Philosophy and Ethics. But, he is also, surprisingly, one other important thing: a freshman. By wearing formal attire every day and creating a podcast, this unique student has caught the attention of many others, which is precisely why Scout Newspaper decided to get to know Anthony Foster a little better.

Last summer, two eager middle school graduates decided to make a newspaper company. Those graduates were Anthony Foster and one of his close friends and “colleagues.” However, upon discovering that The Cherokee Scout already existed, a new idea was born. The podcast. The daring soon-to-be freshmen decided to speak up about the very ideas and opinions that could cause ethical conflict. Foster says, “It’s always just been about controversial topics and I don’t think we’ve ever censored ourselves.”

Foster and his friend continued with the podcast while entering freshman year, promoting it with business cards and handing out around 1,250 cards in total. However, it takes a lot of work to make a good podcast, and since there isn’t a forum at Cherokee for podcasting, Foster and his friend had to roll up their sleeves. They needed to do everything independently outside of school, like working summers to afford the equipment and managing complicated scheduling issues. However, through hard work and determination, the podcast became a reality. Overall, the podcast has received no negative feedback so far, excluding one listener who commented that the business cards weren’t “environmentally friendly.”

The podcast is run by Foster and his close friend, Aiden DeMarsey, who contributes to the podcast primarily by offering a second, honest opinion. In fact, this opinion often directly challenges Foster’s. “He’s there to contradict me,” Foster quips with a smile. “We never agree.”

“The fact that they [listeners] find it debatable or controversial kind of serves our purpose of trying to share different ideas,” Anthony explains. The podcast is still young and growing by the day.

There is another quality about Foster that makes him unique, besides the podcast. As you can see in the photo included, Foster doesn’t just dress like the average student. Trading out jeans and hoodies for three-piece suits and men’s dress shoes, the formality of Foster’s attire takes anyone by surprise. When asked why he dresses the way he does, Foster had quite the story to tell. Like all good stories, it has a romantic twist to it.

A while back, when Anthony found a girl he liked, he wondered if, as he put it, “them looking at me was just them wasting their time.” That’s when a friend stepped in and gave him the advice to dress better. Foster took that advice quite literally, and then his new way of dressing became a habit. “That was the old reason,” he laughs. “Now I just do it.”

“My life has changed a significant amount because I was willing to learn,” Anthony advises. “What I hate to see is an ignorant person or someone who is not willing to venture out of what they already know and what they already believe.” His personal philosophy? “Just try not to be ignorant and try to find out new things.”