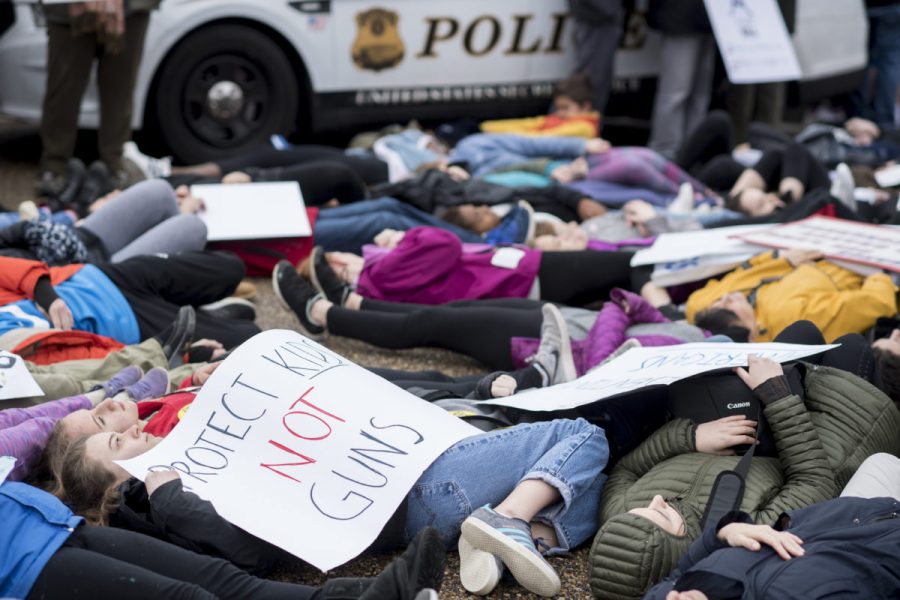 Washington, D.C., area students and supporters protest against gun violence with a lie-in outside of the White House on Monday, Feb. 19, 2018, after 17 people were killed in a shooting at Marjory Stoneman Douglas High School in Parkland, Fla., last week. (Photo By Bill Clark/CQ Roll Call)

In the immediate aftermath of events like the horrific Valentine’s Day mass shooting at Marjory Stoneman Douglas High School in Parkland, Florida, it is easy to become wrapped up in the shock of the tragedy.   And while there is certainly nothing wrong with keeping those affected in our hearts and minds, there comes a point where these thoughts and prayers are worth little if they are not accompanied by meaningful action to prevent further instances.  After all, this is the second school shooting of its kind in the U.S. already this year, after another teenage gunman murdered two students and injured 18 others at a high school in western Kentucky in January, and both of these incidents come following other notorious shootings like the ones that devastated Newtown, Connecticut in 2012 and Columbine, Colorado in 1999. In all, there have been 50 attempted mass shootings, including 25 that were fatal, at schools since Columbine in the United States, according to FBI data. And again, after each shooting, the debate over what to do next at the national level to prevent these shootings from happening again rages anew.

The catalysts in this debate so far in the aftermath of the Parkland massacre have been the teenage survivors of the shootings themselves, who have been outspoken in their support for gun control measures.  They advocate for issues like raising the legal age limit for purchasing firearms to 21, instituting universal background checks for firearm purchases, and banning or otherwise restricting access to assault-style weapons like the AR-15 rifle that was used in the shooting. Gun rights advocates, meanwhile, have attempted to depict the issue as a mental health and school security problem, and have proposed measures like enhancing and updating the national background check system, as opposed to expanding background checks, and arming select faculty members inside of schools.

The conversation about how to prevent these shootings has taken hold at the local level, as well, as a message appeared on the Lenape Regional High School District website over the long President’s Day Weekend after the shooting detailing how the district is looking into proactive measures to enhance security procedures in order to prevent and minimize the effects of a potential shooting. It is unclear at this time, however, what exactly that entails. As it stands, Cherokee’s safety precautions include deploying a pair of armed, on-duty police officers on school grounds at all times, and advising and practicing students and faculty to evacuate the hallways, lock all classroom doors, shut all lights, computer monitors, and shades, and cluster in the least visible corner of the classroom in the event of an active shooter situation.

What is less clear is what steps should be taken to improve these measures. Certainly, there are lessons to be learned on this front from the Parkland tragedy, where the Florida school’s armed security officer, Deputy Scot Peterson, who has since resigned his post, failed to enter the building where the shooting was occurring, initially claiming he thought the shooting was taking place outside the structure. This incident merits expanding mandatory training for our school’s armed officers on how to appropriately and safely respond to various active shooter situations. In Florida, the suspected shooter, a since-indicted 19-year-old former student of the school, also managed to pass a background check, despite recorded behavioral and mental health problems from his time at the school, indicating a failure of communication between school and state officials.

Meanwhile, at the national level, it is time to bridge the political divide in favor of compromise legislation between gun advocacy and gun control factions, like the bill that was passed by the Florida state legislature three weeks after the shooting that raised the legal age limit for purchasing a firearm and increased funding for school mental health officers, but also included provisions allowing districts to arm certain school personnel. Indeed, there is a distinct correlation between tight gun restrictions and reduced gun violence, according to a recent study appearing in JAMA Internal Medicine. The study, which gave each county a score based on its gun restrictions, and a score based on the restrictions of its surrounding state and counties, found that counties with tighter firearm restrictions, like those mostly found in east coast states, Illinois, and California, have a demonstrable correlation with lower rates of homicide and suicide than those that don’t, and that these effects extend to surrounding states and counties. However, this does not mean that tightening gun restrictions is the only path towards avoiding future massacres, nor is it mutually exclusive with instituting the kinds of mental health reforms called for by firearms advocates. Rather, it will take a comprehensive and cooperative effort from those on both sides of the debate to take steps towards preventing tragedies from striking down the line.

What has become abundantly clear in the wake of the massacre is that the time for inaction and stalled debate is long gone. It is now up to those students that have grown up as part of the Columbine generation to come together to call attention to the issues affecting school safety—as they have with the National School Walkout, ongoing as of the publishing of this article, the March for Our Lives, planned for March 24 in Washington, D.C. and in cities across the country—in order to show that they, too, have a voice that cannot and should not be ignored, and cast a spotlight upon those in power in order to push for legislative change. Similarly, it is up to the adults in charge of preventing these situations to put aside political and financial motivations to do what it takes and cooperate in order to move towards a brighter future, at national, state, and local levels. The cycle of inaction that has brought us to this point will bring us here again if we let it continue. It is time for all of us to come together, break the cycle, and signal the dawn of a new, safer day in all of our nation’s schools.